They might’ve failed with the Folio 100 but Toshiba are back with another attempt on the iPad’s throne: Welcome the Toshiba Tablet. 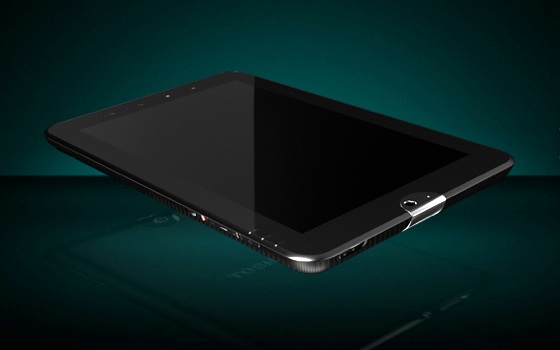 Looking at the promo page, two things immediately strike me. 1) That is one CHUNKY tablet, and 2) Toshiba are really emphasising the technical specs of the device. That’s just the opposite of Apple’s iPad marketing which focuses almost exclusively on the software experience.

If you’re interested in seeing more pics of this beastie, you might prefer to look at the images on The Register’s article as the gallery on Toshiba’s site is very dark.

PS. It looks like someone’s dropped a bollock with Photoshop on that image i’ve used above. Can you spot the error?

(Clue: Look at the reflection.)

The iPhone 4 is a beautiful thing, but a sizeable investment for most people and something you’ll want to keep well protected. I’ve had mine for well over 6 months now and had a chance to try a few cases. Here’s a very quick review of the iPhone 4 protectors i’ve been able to put through everyday usage…

Gear4 JumpSuit
www.gear4.com/product/51/jumpsuit-duo/ A silicone case that feels good in the hand but the large cut out on the bottom (for mic, speaker, dock connector) leaves it very weak and i often found this bottom-front section of casing flopping around, getting caught on things. On some occasions it had worked itself loose to the extend that i found the case half-off the phone upon taking it out of a pocket. The rubber also seemed to make the phone attract a lot of dust. 4/10

Speck PixelSkin HD
www.speckproducts.com/iphone/iphone-4/pixelskin-hd/pixleskinhd.html The PixelSkin is a silicone case but quite a lot stiffer than i had imagined it would be. I had been expecting something soft and rubbery like the Gear4 JumpSuit but it wasn’t. This proves to be a good thing: I never found the PixelSkin HD case had come away from the phone when bringing it out of a pocket and the sturdier plastic feels like it might offer a little more protection from drops, should your worst nightmare become a reality. In addition, the PixelSkin material feels good in the hand – more reassuring than the slippery glass of the phone itself, though admittedly not as grippy as a softer silicone case. Also, like most other iPhone 4 cases, the screen is left unprotected with the PixelSkin – you sacrifice that full protection in order to just be able to pick up the phone and use it – no faffing opening a lid or removing it from a full jacket. The casing attracts a little dust but nowhere near as badly as the Gear4 JumpSuit. 8/10

Griffin Technology FlexGrip Punch
www.griffintechnology.com The FlexGrip Punch is a really soft, perforated silicone case. It is very jelly-like and much squidgier than even the Gear4 offering. It feels good to hold and looks better when fitted than i had imagined it would. Sadly the FlexGrip does seem to attract quite a lot of dust and can work itself loose in a pocket or bag (though not to the same extend as the Gear4 JumpSuit in my experience). Details of the case are hard to find on Griffin’s website but iLounge has a short review with some photos here. 6/10

Apple iPod Socks
store.apple.com/uk/product/M9720G/B As the name suggests, these socks are intended for iPods but the iPhone 4 does fit.  Without a case on, it slips in easily (though does stretch the sock a little) and the phone usually stays inside (sometimes i found it had slipped out fractionally). I quite liked using the iPod Sock as it means you get to enjoy the phone as the designers intended, whilst also having some scratch and knock protection (to the whole phone too, it should be noted) when in your pocket. Of course, the drawback to the sock is that you simply can’t answer phone calls quickly – retrieving the phone from a pocket, then slipping off the sock feels like it takes an awfully long time when the phone is ringing. 6/10

Any Old Sock
en.wikipedia.org/wiki/Sock You could also try carrying your phone in a sock. If you’ve big feet like me then a thick boot sock can actually make a formidable-looking iPhone protector – almost rugby ball-like. And remember, it provides all-round protection. Sadly it is almost impossible to carry a huge lumpy ball of sock and technology discreetly and you look like a prize tit unwrapping a phone from a sock at the best of times, let alone when it is ringing out loud. 2/10

According to a post over at Core77, some clever French gentlemen have developed and patented a paint and electronics system that will mean you never again need fumble around in the dark for a physical light switch, you just simply touch the wall to illuminate a room. 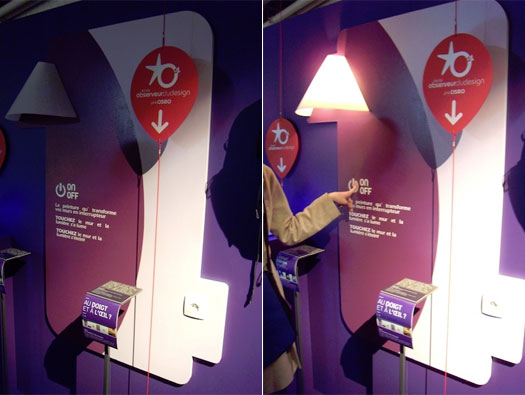 Incredible stuff. There are few details on how it works (naturally) but i’m already envisaging a future where you can dim or brighten the lighting in a room simply by using an iPhone-esque pinch gesture on the nearest surface. Though i suppose you’d only need that if you weren’t already controlling all aspects of your home’s electronics from an iPhone/iPad-like device anyway.

I have to restart? Hmm, well that’s not really “ready to use” is it, Toshiba? 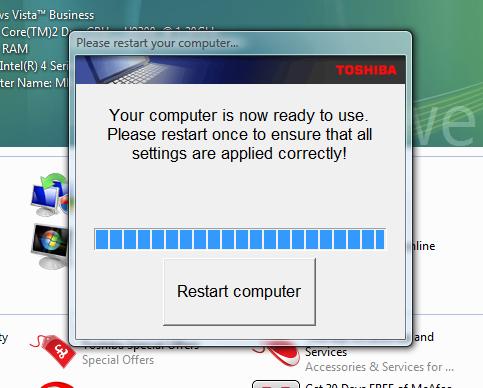