Wouldn’t it be marvellous if you could separate your camera into the “picture-taking” part and the “controller” part? Perhaps you recall that i’ve mentioned this on here before. Perhaps not. Either way, here’s the (very poor) drawing i did… 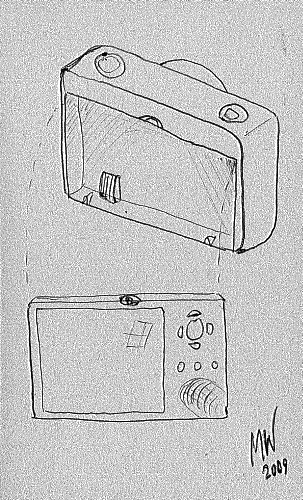 I think that image conveys the idea – it’s just not very impressive, is it? No. So how about this instead…

This lovely piece of design is the WVIL (Wireless Viewfinder Interchangeable Lens) by the Artefact group, created in answer to the question “what’s next for camera design?”

The patent-pending WVIL system takes the connectivity and application platform capabilities of today’s smart phones and wirelessly connects them with interchangeable full SLR-quality optics. It is the inevitable solution for photographers who expect the power of modern mobile devices but who also demand uncompromised quality.

The WVIL is just a concept at present but i don’t expect that will remain the case for very long.

Andrew Myers makes three-dimensional portraits by painting the heads of screws. Cleverer and more beautiful than my description suggests.

This post originally started as a rant about how every Twitter app available for the iPhone had some flaw. How it was seemingly impossible for developers to take the best of all the other apps on the market and make their offering perfect. How the official Twitter app always fucks up loading the “gaps” in your timeline when you’re playing catchup and how it crashes when some image fails to load. How Twitterific has no drafts and lacks admin tools for lists. How Echofon seems to have no option to save drafts. How Twitbird can’t favourite tweets. How Osfoora just seems to be a blatant rip-off of the official Twitter app yet people claim it’s better. How none of these apps will show you who retweeted your tweet.

But i don’t have to write any of that anymore, because Tweetbot came along. Quick and simple to use but feature rich, rock solid and – the holy grail – can show who retweeted you. It isn’t completely perfect (yet) but it blows everything else clean out of the water in my opinion.

On the Mac App Store.

The Mac App Store strikes me as being fantastic for Mr and Mrs John Smith. Just like the App Store for iOS devices, it offers a simple way to purchase and install software plus a convenient and equally simple way of staying up to date.

For me, there’s no question about it, the “app store” is definitely the future of software sales.

Some things about the current Apple setup do puzzle me though.

Mac OS X’s long-standing Software Update mechanism is intended to keep the system software up to date but it also currently provides updates to Apple applications, such as those in the iLife and iWork bundles, iTunes, Aperture, etc. However, the iLife and iWork apps (et al) are available – and sold individually, too – on Mac App Store, so what happens now? Will updates for these apps now be pushed from App Store or Software Update? Or both? Or a mish-mash depending on if you’re running a pre- or post-Mac App Store versions of the apps?? There are rumours that future versions of OS X itself will be sold and installed via the Mac App Store – so will system updates comes through it or Software Update? Not so straight forward and lovely and logical for Mr and Mrs Smith now, is it?

Furthermore, what happens as software ages? I fully expect major version releases of Apple and 3rd party apps to require a new purchase rather than being a free update. That’s fair enough, vendors need to get paid for their efforts. However, the beauty of the App Store is that you can re-download the apps you already own for free should you ever need to wipe your Mac’s hard drive or when you buy a new Mac. But how will the Mac App Store cope with this? Will the App Store keep old versions of apps online as new major ones are released? And what about hardware requirements changing? Lets say i buy MS Word 2014 from the App Store and all’s well until a couple of years later when my Mac’s hard disk dies and i have to replace it, reinstall the OS, etc. I re-download the apps i own from App Store – but wait, MS Word 2016 is the current version, which i never bothered buying because the requirements were higher than my Mac’s spec – so how do i get 2014 back? MS don’t sell discs anymore. 2014 isn’t on the App Store. Do i have to buy a brand new Mac just to be able to run Word?

The future of the Mac App Store is very bright but as it matures I expect there will be some unwelcome trade-offs and some difficult choices to make.

Note: The Mac App Store opened for business on 6th January 2011. This post has been sat in my Drafts folder since a few days after that. I thought i’d better finish it off and post it now before the questions contained within are redundant.

Update: How odd that i should finally get around to posting my thoughts on Apple’s Mac App Store on the day that Amazon announce their own Mac Download Store. This Amazon offering isn’t able to compete with Apple’s in terms of system integration (and thus simplicity) but clearly this confirms the direction in which software sales are heading.

No time for dilly-dallying here, i’m just going to come out and say it… Wouldn’t it be cute if Nestlé stuck a thumb on the Kit-Kat? Who wouldn’t love to eat a Kit-Kat Hand™? 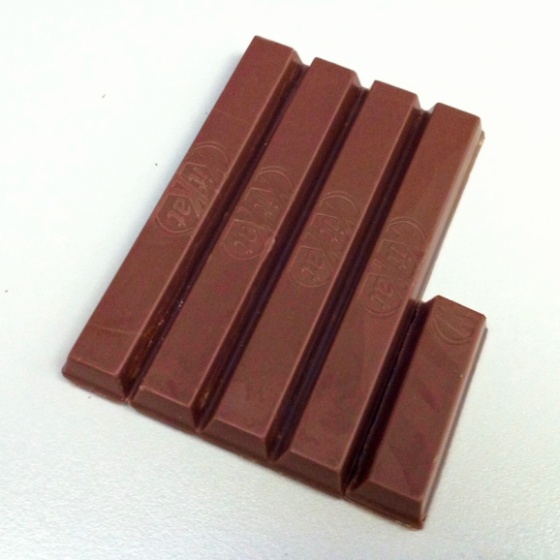 Not bad, eh? But you’re thinking “Oh, it’ll never get made. Think of the special packaging required!” Yeah, well that’s easily overcome – package them in twos! The Kit-Kat Handshake™!

“Oh, but then that’ll be too much chocolate! Too many calories! Too much fat!” you say. Easily overcome i reply – You market it as a pack to be shared. Hell, the “handshake” thing even lends itself to that. So, healthy people can share a treat and fatties like me (who think nothing of eating two 4-finger Kit-Kats anyway) can scoff all 9 fingers to themselves. Win-Win.

The ball is in your court, Nestlé.

PS. Nestlé bods, if you do make this, how about sending a little reward my way? 1% of the profits on the Handshake™? Life-time supply of them? Something like that’d be awfully nice. Ta.