My sister is thinking of buying an iPhone. She mentioned this to me the other day and remarked how expensive they were. If i’m honest, i wasn’t really paying much attention – until she said something about the phone being over £300 on several of O2’s tariffs. This struck me as odd, as i recalled when i was shopping around at iPhone 4 launch time there being only 1  tariff option that meant paying £300+ for the handset. Curious, I brought up the Pay Monthly tariffs on O2’s website and, sure enough, the handset prices were all more expensive than i remembered them being.

My first thought was VAT. The VAT rate in Britain rose from 17.5% to 20% in January. That must be it… Except, no, upon examination, some of these prices are more – way more, in fact – than the 2.5% increase in tax would have made them.

At this point i wondered if it was just an O2 price hike, so i dug out my price list from June 2010 and checked the current Vodafone and Orange prices against it too. Here’s a breakdown of the launch-time prices versus the current prices (and also what the prices should’ve been if it was just down to the VAT rise)… 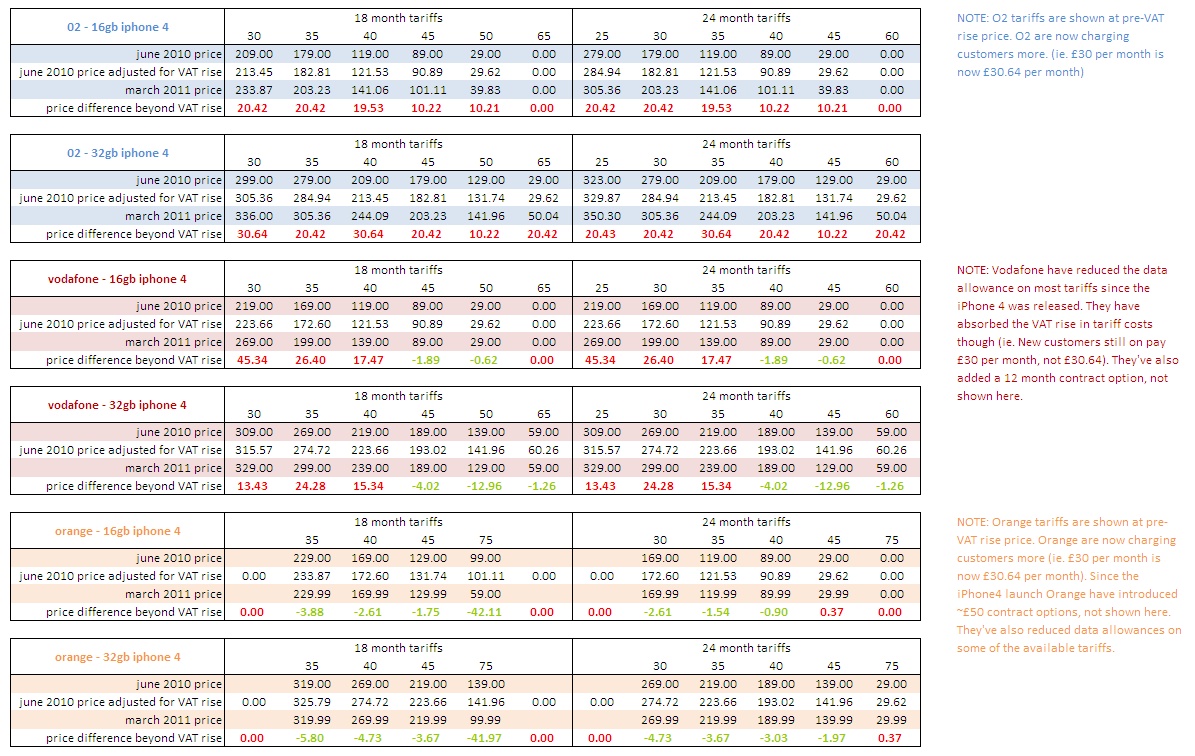 Orange, it seems, have been quite fair to consumers – they’ve just stuck 99 pence onto most handset prices and are therefore actually a little out of pocket taken against the VAT rise. It is a different story with O2 and Vodafone though. Customers buying an iPhone 4 from O2 are now paying upto £20 more for the 16GB model and upto £30 more for the 32GB model. Those consumers choosing the Vodafone network are in some instances paying over £45 more than those who bought the same phone 9 months ago. Adding insult to injury, Orange and Vodafone have reduced the mobile data allowance on many tariffs, so as well as paying more for a 9 month old handset some new customers will be getting less for the monthly price they pay too.

So, it appears mobile operators are charging more for the iPhone 4 now than 9 months ago when it was a brand-spanking-new piece of technology. There’s nothing wrong with this per se – we live in a capitalist world after all and companies can charge what they like for products – but when was the last time you saw a mobile telephone have a higher price-tag 9 months after release? They’re usually being given away free by that point. Furthermore, Apple haven’t raised the price of the contract-free iPhone 4 (save for the VAT rise – 16GB was £499 now £510, 32GB was £599 now £612) so why have the telcos?

I’ve advised my sister to hold off purchasing a new phone until summer. Even if she doesn’t get an “iPhone 5”, the price of an iPhone 4 should be much, much lower.

Update: A clever twitter follower has pointed out that the reason for the price rise might be so they can later claim to have “discounted” the iPhone 4. It makes sense and is slightly less dastardly than the reason being simply “because they can”.