Rumour has it that we’ll see two new iPhone models announced at next week’s Apple event – the iPhone 5S, a successor to the iPhone 5, and the iPhone 5C, a new “lower cost” iPhone.

Historically the current iPhone model would become the cheaper, second-tier offering once a newer version is available but the rumoured 5C could change that MO. Will the two new models come in and replace the current 5 / 4S / 4 line-up entirely? Perhaps the 5S and 5C will sit either side of the iPhone 5, thus scrapping the 4/4S? Or maybe the 4S will actually sit as the lowest cost option beneath 5S and 5C? Of course nobody outside Apple will know for sure until next week but I suspect it’s going to be the former and the new models will form the entire range between them.

Here’s what i’m expecting from the new devices, an amalgam of my hopes and my fears. I’ve tried to keep it sensible but may have succumbed to the odd wild rumour1… 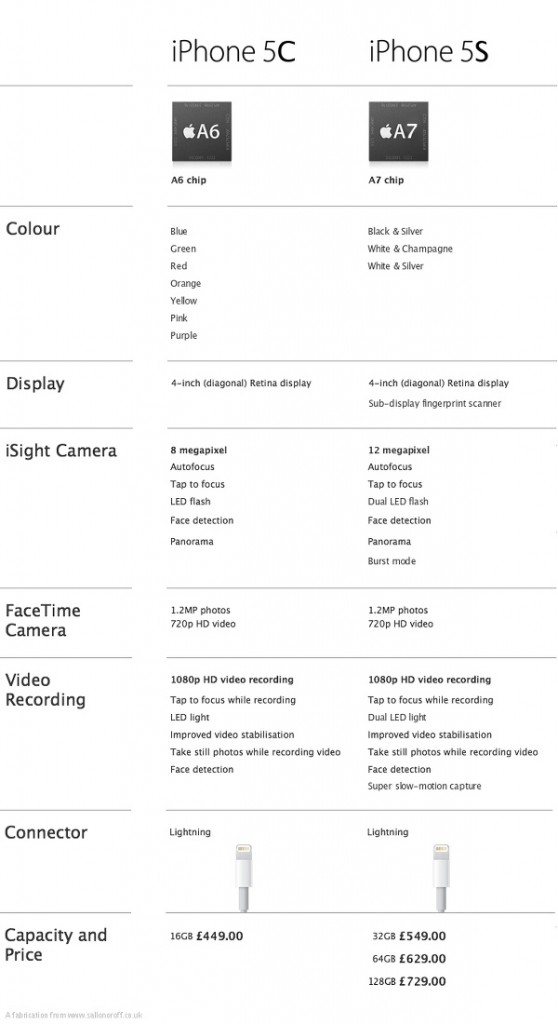 A fabricated 5S/5C data sheet for your enjoyment. Click for full image.

That’s all guesswork, naturally. Don’t phone, it’s just for fun. The only certainties here are that Apple will announce something next week, the media will pick on the one immediately obvious but minor flaw2 and customers will buy the product regardless.