In less than 2 hours from now, Apple will reveal their “latest creation”. All rumours point to a tablet-type device and every mac/tech website in the world is carrying their version of what may or may not transpire today. I’m not going to bother guessing the specifics of what Apple will announce, as i’ll surely be proven wrong but i do have a few thoughts on the rumours circulating. Namely…

Will the tablet run the iPhone OS, Mac OSX or some new variant?

I say it has to run the iPhone’s version of OSX, or some new fork of that system. A cynic (hello!) may say that Apple wants to maintain and extend the iPhone’s “app” ecosystem – simply ensuring that they get a cut of all application sales for their platform, unlike the big fat nothing they get on the Mac. However, there’s actually a more obvious and sensible reason that it won’t run full Mac OSX… it won’t be powerful enough. To make a tablet that’s thin enough and light enough to be conveniently held and carried Apple won’t be putting in regular laptop-spec innards – they’ll be going with a beefier version of the iPhone’s workings. (Though of course if i’m right, we’ll never officially be told the internal spec – just like the iPhone. The end-user needn’t know or care what powers it.)

Will there be two versions of the tablet?

The rumours say that, following the iPod touch and iPhone trend, there’ll be wifi and wifi-and-3g versions of the tablet available. I don’t buy it though. The difference between the touch and the iPhone is more than the 3g connectivity – it is the phone functionality. A tablet with 3g isn’t going to have any extra functionality – it’d just mean you had a much better chance of staying “connected”. This might justify a slightly higher price tag for the 3g-enabled model… but then a 3g-enabled model could be flogged by the mobile telcos at a subsidised price, assuming you sign-up for their 3g service. Where does that leave you? Two tablets but the one with less functionality costing more. No chance. I reckon there’s one tablet. One tablet with wifi and 3g connectivity.

How much will the tablet cost?

The rumours say we’ll be looking at $800-1000 (or about £700-800) but obviously less if you get one on contract from a telco. This sounds expensive for a (computationally) low-powered machine when you can pick up any one of a vast number of netbooks and low-end laptops for much, much less money… but remember that an unlocked iPhone 3GS costs at least £450. I think that the rumour-mill has it about right on this occasion. Of course Apple may charge much more for this initial release knowing full-well that plenty of fanboys will pay anything but i actually wouldn’t be very surprised if Apple shocked the world with a (reasonably) low price tag. After-all, the iPhone-without-the-phone-bits (iPod touch) only retails at £239 (for a 32GB model, vs £549 for a 32GB iPhone 3GS).

Of course, while i’m as excited as everyone else to see what Apple produces tonight, it doesn’t actually matter that much to me because i won’t be buying a tablet1. My next Apple purchase will (at long last) be an iPhone – so i’ll be more interested to see what today’s announcements mean for that device. Will it get a price cut? Will tablet interface details point to obvious updates to the iPhone hardware? Will OS4.0 updates by themselves be enough reason to wait for the next iPhone? Fingers-crossed all this and more will be answered in a few short hours. 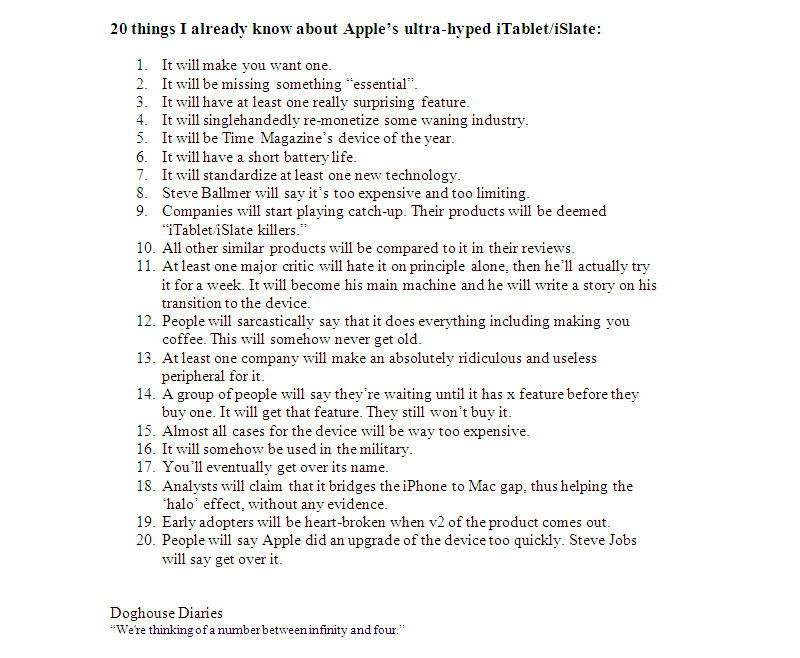