Mentioning the Palm Pre always gets me thinking about a report from last December that Elevation Partners (ie. Bono and some Venture Capitalist chums) were pumping $100million into Palm. At the time, to little old me at least, it seemed daft that big bucks were being invested in some stagnant tech company. I just assumed Bono et al were throwing some more of their monopoly money away to prop up the firm in which they already owned a 25% stake. Of course, come January it was clear why they were so keen… Palm announced the Pre.

Here’s an excerpt of what Elevation said at the time of their investment:

“We believe that Palm is in a position to transform the cell phone industry, and we are pleased to have the opportunity to make this additional investment in the company … Palm has an industry-leading team and an exciting, differentiated product roadmap. We are proud to be associated with the company and look forward to great things from Palm in 2009 and beyond.”

Funny how what just sounded like optimistic investor blurb in December, now with hindsight seems so much more revealing.

But then maybe we should’ve all spotted a BIG product announcement coming anyway… after-all, Elevation Partners made a couple of their founding partners into directors of Palm (one of these being Fred Anderson – former VP, CFO, intertim-CEO and director of Apple) and installed Jon Rubenstein (former Senior VP of Hardware Engineering at Apple and Head of iPod Division) as Executive Chairman too. Since then Palm has poached Lynn Fox (was a director of PR at Apple), Mike Bell (was VP of CPU Software at Apple) and is said to have a standing offer of 1.5x salary for any Apple engineers looking to defect.

No wonder that Pre looks so impressive.

gPhone lacks multi-touch because of Apple?

John Gruber at DaringFireball seconds a fascinating report that the GooglePhone, the G1, lacks multi-touch support because Apple asked/told/ordered/warned them not to. It also appears that Google are relieved to have complied given the patents-spat that may well kick off between Apple and Palm over the yet-to-be-released Palm Pre.

Amazon yesterday announced a new version of their Kindle electronic book reader thingy-ma-jig and my word does it look improved. The fugly angular look is out and replaced by lovely iPod-esque curves and metal(-look?) back plate. Indeed, Amazon also appear to be borrowing Apple’s promo photography style – solid white or black backgrounds and semi-reflective floors. Someone definitely sees this device as the iPod of reading. 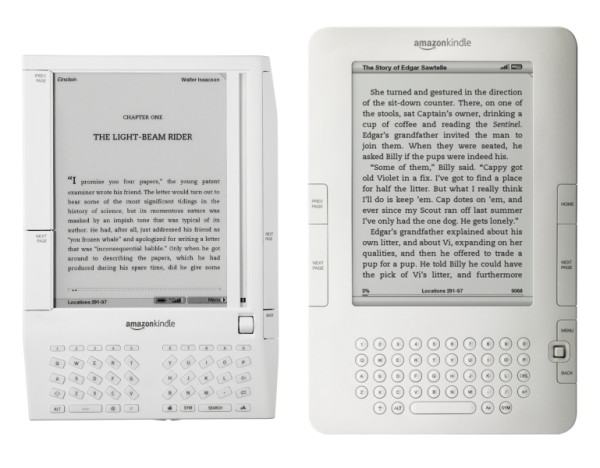 Anywho, aside from the aesthetic improvements it’s now lighter, thinner, has more storage space, sports a crisper display and has improved battery life (upto 4 days apparently). Most impressive for me though is the Automatic Library Backup feature… That is to say that Amazon remembers what you’ve bought (of course) and allows you to download those books again for free if you ever need to. Now that is the sort of “fair play” common sense that i like to see. Such a shame that these days we’ve started to expect to have to pay for all our digital content again if it’s ever lost.

I’d very much like to try out a Kindle and see first-hand what they’re like to read from and use. Sadly that won’t be happening any time soon for a couple of reasons. 1) You can’t get them in the UK. Amazon intend to sell the Kindle 2  internationally – but have no date for that yet. And 2) I certainly won’t be buying one even if they were available here as they’re far too expensive. The US RRP of $359 equates to about £240 which is dear enough – but you know it’d end up being more than that here. I guess something like £299 if/when it does go on sale. No thanks. Especially when the Kindle “books” aren’t substantially cheaper than the physical paper copy. But then i probably had much the same feelings towards the original iPod.

Some outlets are referring to it as Bolt, others as Bolt 3D, but if you watch even half as much TV as me you can’t have helped but heard about Disney’s latest animated offering. It seems a day doesn’t pass lately where there isn’t a rave review of Bolt to be seen somewhere. For a Disney movie, this level of marketing isn’t a surprise. What is though, are the number of reviewers that are surprised to find that the film is good. Yes it’s true that Disney haven’t released any decent animated movies of their own for years now… but are people forgetting that Disney bought Pixar? And that the brilliant John Lasseter is now in charge at Pixar and Disney Animation Studios? For me, it would’ve been a shock if Pixar and Lasseter’s greatness hadn’t rubbed off. 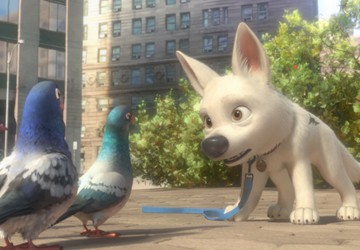 I doubt i’ll watch Bolt until it’s on DVD, or maybe even until it makes it onto TV, but when i do see it, i’ll fully expect a Pixar experience.

And for those wondering why i’m writing about kid movies in this “tech” blog… well, it’s because of the link to Pixar. I love Pixar! Why? Well, primarily because Toy Story was mind-bogglingly brilliant and different… but also because of the heritage – Pixar was conceived at Lucasfilm (i love Star Wars!) and brought into the world by Steve Jobs, who’d just been chucked from Apple (i love Apple!). Not geeky enough links for you? OK, I just discovered that John Lasseter drew the most famous version of the BSD Daemon… How’s that?