How to get a refund on your broken XBOX360.

…or, rather, How i got a refund on a broken XBOX360. Still, there may be some useful pointers to help you out in here.

So, one day i turned on my 18 month old XBOX360 and instead of the usual on-screen welcome, i was presented with this: 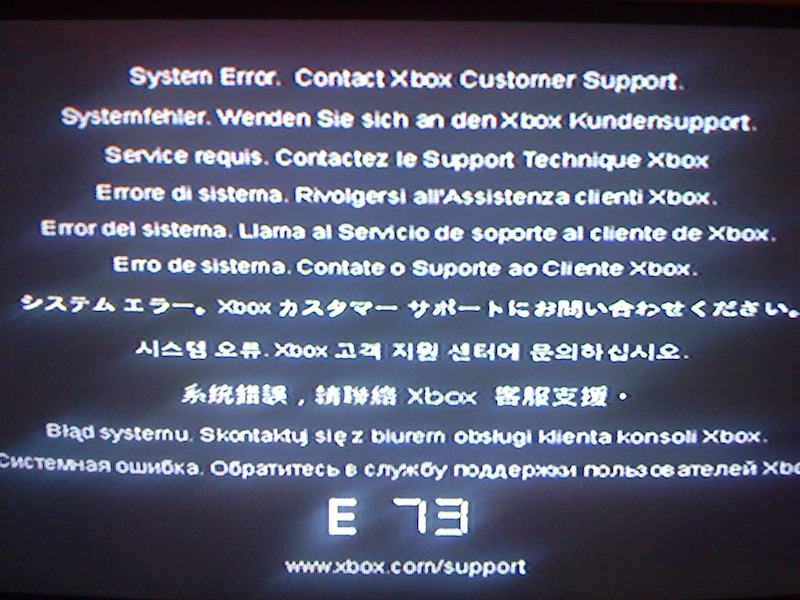 And on the console itself, instead of a green light i was being shown a blinking red one: 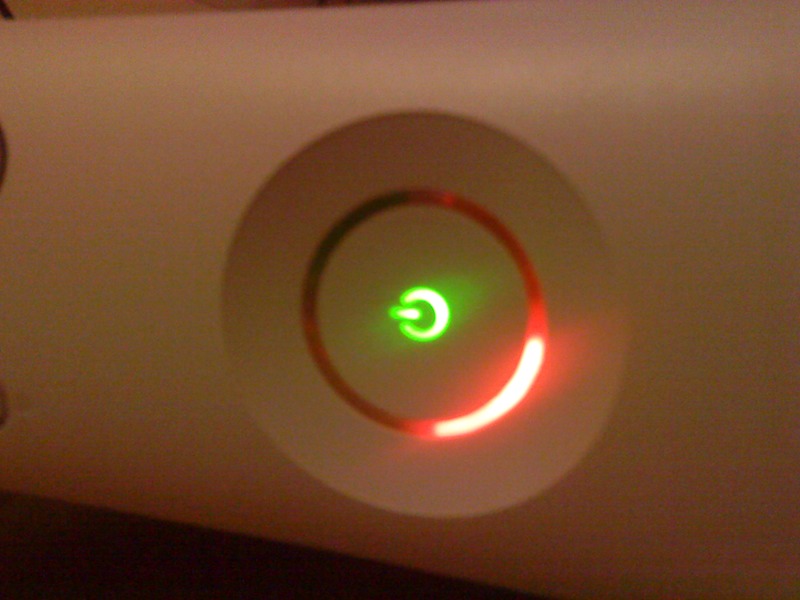 I immediately tried all the usual tricks to bring the thing back to life (restarting, unplugging it for a few minutes, disconnecting everything but the power and av cables, etc) but had no luck – so i rang Microsoft.

As the machine was outside the 12 month manufacturer warranty and not suffering from one of the two problems that MS offer a 3 year warranty on (Red Ring of Death or “E74” error) i didn’t expect much but thought it worth a shot. I explained the problem to Microsoft’s representative but was told, essentially, it wasn’t their problem but i could send it in for repair (at a cost of about £100 if booked over the phone or about £90 if i used the online repair booking form). Trying my luck, i grumbled about it not being acceptable that an 18 month old piece of technology should fail like this but they weren’t budging. Microsoft’s phone jockey finally got rid of me by giving me an email address1 that he assured me was looked after by senior customer service folk who would be better positioned to deal with my complaint. I duly emailed this address and sat back waiting for a response.

In the meantime, i tried to find out more about the “E73 System Error” my console was plagued with. It soon became clear that this was a common fault but that no-one really knew what caused it (the most often touted explanation out on the wilds of the web was that it’s a fault with the ethernet port/assembly). However, there were plenty of quick, dirty, temporary fixes suggested and seeing nothing to lose i decided to try The Toothpick Trick. It seemed pretty illogical that causing the XBOX to overheat by stopping the main fans with toothpicks would clear a show-stopping system error but, unfathomably, it worked first time. The XBOX booted like nothing had ever been wrong and i was gaming again in minutes.

Two weeks passed and Microsoft finally responded to my email, with a thoroughly expected “Sorry, no dice, pal” (I may be paraphrasing). So i was now left with a temperamental XBOX and it seemed the only solutions available to me were 1) carry on using the toothpick treatment to reset the machine every couple of days, 2) send the machine off to Microsoft for repair (£90), or 3) buy a new console (£120-30) and stick my current XBOX hard drive (complete with all my precious saved games and downloads) on that.

As time drew slowly onwards and the XBOX was needing its fix of overheating more and more frequently, i was starting to accept that option 3 was looking inevitable2. Then some somber, last-ditch googling struck gold – I found this forum thread. That short tale of consumer victory3 and the “complaint” template provided therein inspired me to take action.

I called Well-Known Online Retailer who had sold me the console, explained the problem and asked them for a refund or replacement in line with the Sales of Goods Act. Unsurprisingly, the call centre operative claimed she was unable to assist since the product had been purchased such a long time ago and that i should contact the manufacturer. I had, of course, anticipated this and was not put-off. I persisted in my claim until she finally said that she would escalate the matter and i would receive an email response within 48 hours.

Slightly-more-than-48-hours later i received the promised email which stated:

All electronic items purchased from [Well-Known Online Retailer] come with a one year warranty from the manufacturer, unless otherwise stated.

You have, until recently, used the product for a period of time which exceeds the manufacturer’s warranty period without reporting any fault with it. Based on the length of use and the nature of the product, we have concluded that the issue with the product does not arise from a defect in the product which existed at the time of purchase, and consequently we cannot assist you further.

We recommend that you consult the troubleshooting guide in the owner’s manual and / or the manufacturer’s website to ascertain if this is a known issue. In many cases we have found that common faults have been recognised by the manufacturer, and that they are able to offer quick solutions or an out of warranty repair service.

We currently do not offer an extended warranty on the electronics items sold on our website. We recommend consulting the manual that came with the package for warranty and service information.

Thank you for shopping at [Well-Known Online Retailer].

All of which i had already been told over the phone days earlier. So much for the matter being “escalated”. I wrote quite a lengthy reply to this but the pertinent section was as follows (based on my earlier hero’s template):

Perhaps i might remind you that in the UK, under the Sales of Goods Act (1979) (Amended), the seller has a responsibility to the buyer for up to 6 (SIX) years after the date of the sale of goods and that the goods remain your responsibility during that time. In this particular case, the XBOX360 console has developed a fault (a well-documented and common fault by all accounts) in little over 18 months of purchase. I believe that it is not reasonable to expect an item costing hundreds of pounds to develop a fault in this timescale and, as my contract is with you, the retailer, and not the manufacturer, i fully expect the console to be repaired or replaced at no inconvenience to myself.

A few days later i received another email from the retailer apologising for “any frustration caused” and offering a refund, since they didn’t have any XBOX360 consoles in stock(!). I assume this non-sensical claim was merely them distancing themselves from any future claim i might make but i can’t say i was bothered as a refund actually worked out better than a direct replacement. The refund of the price of an 18 month old 20GB XBOX360 was more than enough to fund a brand new 120GB XBOX360 Elite.

So, all’s well that ends well, right? Well, yes. But there’s a BUT. After confirming i would accept a refund i received a further email from the retailer (this time from someone apparently rather senior) which read:

I am writing in regard to our correspondence […] which was incorrect when it comes to your X-box order […] and statements made about refund or replacement.

However, as this has been promised, I have refunded […] back to your payment card used on the order.

In regard to the Sales of Goods Act, the European Directive 1999/44/EC allows for a claim to be taken (under certain circumstances) for a period up to two years in accordance with European Law, and up to six years under UK law.

This does not imply that an item has a warranty of two years or six years respectively. It merely permits an individual to make a claim under certain circumstances within that time period, e.g. should a fault be proved to have been inherent in the first six months.

[Well-Known Online Retailer] do not provide the warranty. We do, however, cover our obligations under the relevant legislation such as the Sales of Goods Act 1979 in the UK. Under the Sale of Goods Act, a consumer is granted recourse against a seller of goods if those goods were defective at the time of purchase. This may include, in certain circumstances, repair, refund or replacement but only to the extent that doing so is not disproportionate to the value of the goods, having regard to the use the customer has already had of the goods and the nature of the goods.

You purchased your product approximately twenty-one months ago and, until recently, have used it successfully and reported no fault with the product. Given your satisfactory use of the product for a period of time which exceeded the manufacturer’s warranty period, it is not established that the product did not conform to the contract (i.e. was defective) at the time of purchase.

So, basically, “one of my underlings fucked-up and promised a refund when they shouldn’t have”. Whether this is the truth and i was lucky to get a refund, or whether this just got sent out to make it appear that way and prevent me encouraging others to try and enforce their consumer rights, i do not know.

I was pleased with my (small) victory though – it restored my faith in the power of the consumer – and i will definitely take similar action should this sort of thing ever happen again.

Note: In this particular instance, while i was pleased with a refund, i was disappointed that ultimately the retailer has had to pay for Microsoft’s shoddy hardware. The XBOX360 is riddled with faults and i believe the 3 year warranty MS offer for RROD and E74 problems should actually extend to all hardware issues. That would be fairer to the consumer and the retailer, and the “compensation” costs would hopefully encourage MS to put in a little more R&D and Quality Assurance in the first place. As it stands though, most XBOX gamers, desperate to play (and tied to MS with XBOX Live subscriptions and pre-paid Microsoft Points) give-in easily and either cough up for a repair or just go out an buy a brand new console.