OK, so i deliberately misled you with the title of this piece. Apple haven’t, as far as i know, just released any shiny new gadgetry for us to fawn over. Sorry. The persistent rumours of an iTablet and fervent speculation about the purpose and functionality of such a device (eg. 1, 2, 3, 4, 5, etc) have worn me down however and led to me joining in with silly season. What we have here then are a few ideas of my own. There’s nothing here about this mythical tablet, these are just some concepts that i’ve been visualising in the ol’ noggin for a little while now. They’ll probably never exist in the real world but should anything vaguely similar actually become a reality, i’ll be able to trot out a link to this post and claim some sort of prescience. 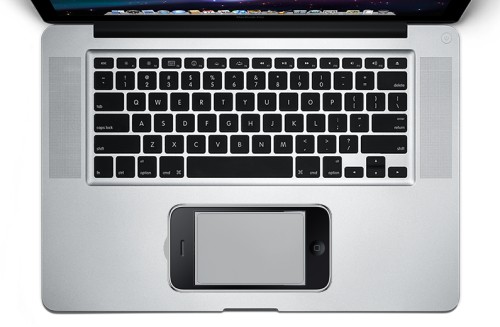 A MacBook (Pro) in which the normal multi-touch trackpad device is removable, leaving behind a iPod Touch/iPhone-shaped hole. Slip your handheld into this “dock” and while the device charges/is mounted by the Mac/etc you use its screen as your notebook’s trackpad.

All Apple would need to do to make this a reality right now is figure out how to free up some internal space for the ‘hole’. So, an internal re-design and a factory re-tool is all it’d take before this could be yours. Clearly i’ve not thought this through terribly well though, since you’d only need to have left your removable trackpad at home and have your iPhone stolen to be also left with a practically useless notebook too.

Still, i reckon it only makes sense for the two devices to play Mighty Morphin’ Power Rangers when they’re together – I mean, if you’re using one, you’re not using the other, right? (Sorry, did i forget to mention that if it’s an iPhone you have docked, the phone functionality transfers to the Mac?)

Sorry, no picture here but there’s no real need since this one is just a future expansion of the previous idea.

At some point in the future, the iPod/iPhone/iWhatever-It’s-Called-At-That-Time will become powerful enough to be an “everyday” computer for most consumers (some might argue it’s already there with the iPhone 3GS). It’ll have the processing power to run most apps you use day-to-day and the capacity to store every digital file you possess. Everyone will carry their life around on this thing but the problem will be (as it is now with the iPhone) that it’s too small to use for long stints. You’ll want some way of easily adding a bigger screen, a real keyboard and maybe attach other peripherals – so what better than a “dock” that happens to look a lot like a present-day notebook?

This dock thing would have no real processing power itself  (or maybe it could? – to boost the iWhatever’s performance – especially in graphics department?) but gives you the larger display, a physical keyboard, beefier speakers, USB 4.0 ports, a BlueRay2.0 drive and/or whatever is a la mode in this future world. There’d be a battery inside so can be used on move and the iWhatever used for a longer stint. Sure it’d be useless without the iWhatever attached so that’s why it might be best to think of it more as a mobile Apple display.

This really is one very much for the future but i expect you’re not convinced. No, me neither. Perhaps the next one is a bit more feasible though… Obvious even…

This is a MacBook (Pro) with a touchscreen. Not on the main display though, that one’s as normal as you might find on any present notebook. No, the touchscreen here is on the “lap” part of the laptop, replacing the physical keyboard and trackpad. Not particularly difficult to envisage but here’s a little help for those that are struggling… 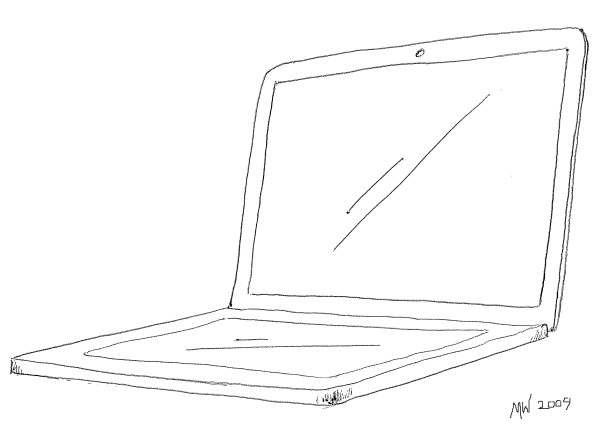 No, I can’t draw straight lines.

By default the multi-touch, haptic-feedback touchscreen would be used as keyboard and trackpad but it could become anything you want (well, anything Apple’s programmers will allow). Video-edit controls perhaps? A graphics tablet for the pro Photoshoppers? A musical keyboard? A doodle-pad? A giant click wheel? It could become anything. Not to mention that Apple would longer need to manufacturer different keyboards for different languages (or even keyboard layouts – have Dvorak if you want it) since it could all be done in the software.

Plus, with a much larger multi-touch surface there’d be a massive opportunity for new gestures, taking interactions way beyond the current pinch, rotate and finger-swipe controls.

I believe this sort of device and functionality would be possible with current technology but also that there are too many things that would need serious work to perfect, such as making a glass screen act sufficiently like a real keyboard and dealing with the impact of extra power consumption from the second screen on battery life. For reasons such as these, i don’t expect to see anything exactly like this from Apple for a while but i am hoping i’ll be able to claim my scout badge for prescience at some point in the future.

PS. It looks like MacPredictions.com is quite good at this sort of foresight caper. Take a look.