The Register is today reporting on a patent application by Apple for a “3D Remote Controller”, presumably intended for use with the Apple TV. It appears to be a Wii-Remote-esque device, capable of, well, Wii-Remote-esque things. It is very interesting to see that Apple is at least pondering over this sort of interface but there’s nothing all that ground-breaking to tell really. However, one aspect of the patent application is very, very curious – this remote can be used as a “torch” on the screen: 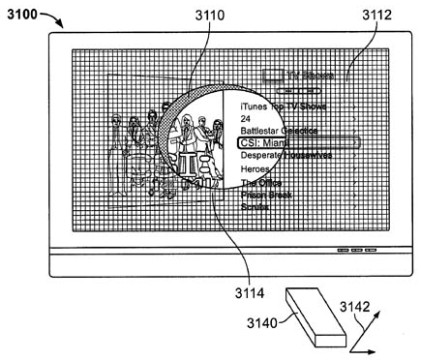 The screen greys-out or dims and “light” from the “torch” illuminates whichever part of the screen you’re pointing it at. It’s a very cool geeky thing to be able to do but what’s the practical purpose? Is there one? I’m struggling. The best i can offer is that you’d be able to easily point something of interest out during a film or tv show… sort of how football pundits on TV are able to “draw” on footage to highlight their point about Frank Lampard (for example) being a useless waste of space.

Even more bizarrely though, the inverse of this torch function is mentioned in the application. So the screen stays lit except for the spot where you’re aiming the torch. What’s that all about? It was difficult enough to see a use for a virtual on-screen torch! I’m really struggling here… Hmmm… Maybe it’s for the sort of parents who think film censors aren’t thorough enough?