I recently found this cache of (photos of) letters. That is to say, those things words are built with… not those things built with words. A wonderful resource available under a Creative Commons licence. All hail Leo Rynolds.

Oh, and whilst i’m on with images… Mandolux is always worth a look. Mando takes some stunningly beautiful pictures which work very well as desktop wallpaper. 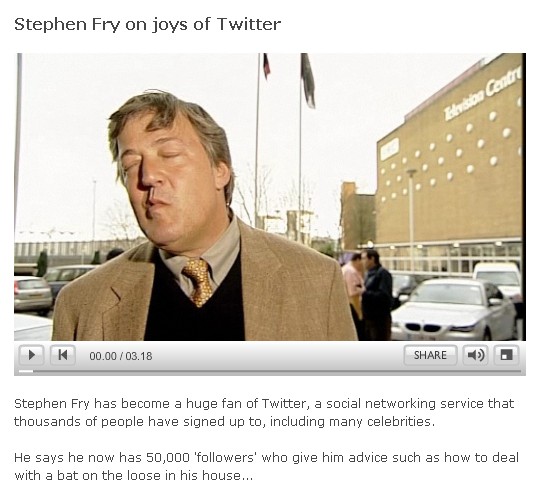 I decided that i prefer to use Tags in this blog rather than Categories… so i converted all the existing Categories to Tags and went to disable Categories. Only i can’t find anywhere in the WordPress settings to turn off all reference to them and thus all my posts were left reading “Posted in Uncategorized …” under the title. Messy.

Fortunately WordPress’ inbuilt editor means you can simply edit out bits you don’t want, so i was able to just delete (well, comment-out) all references to “the_category” i found in the Simplex theme. If you want to so the same you’ll need to fiddle with index.php, single.php, archive.php and search.php.

I was quite surprised to learn today that Apple have quietly updated the “old” white MacBook to include the same NVIDIA GeForce 9400M graphics that its younger Aluminium brother uses. They’ve also doubled the amount of RAM to 2GB and updated Bluetooth to 2.1, while dropping cpu speed to 2.0GHz (from 2.1GHz, but the bus speed is up from 866MHz to 1066Mhz). I had assumed that the white MacBook was still on sale to clear out stock whilst also acting as a “budget” Mac offering but this update would suggest i was quite wrong. Maybe with the global economy in the state it is, Apple decided to keep the cheaper option available a while longer? Cheaper for them to upgrade the internals of the White than reduce the prices on the Aluminium perhaps?

So now the White shares much the same spec as the base Aluminium model, what do you get for the extra £210 on the price tag of the latter? Obviously there’s the sturdier aluminium “unibody” casing over a white polycarbonate shell but other than that… well… (in no particular order)

In other words, not a lot that Joe Public would spot. It’s the choice of a robust (solid aluminium case, glass screen) notebook that might run for an extra half-hour or two hundred quid in your pocket and a machine with Firewire. Difficult to call, but i think i’d probably go with the White MacBook, tight Yorkshireman that i am. Funny, because if i’d chosen the White MacBook back in October when the Aluminium MacBook was announced i’d be gutted by today’s update. Absolutely gutted. Fortunately though, back then, i decided on the Aluminium MacBook because of the “5 times faster” nVidia graphics…

I appreciate that some people have poor eyesight, and might refuse to wear specs, but isn’t this going a bit far…1 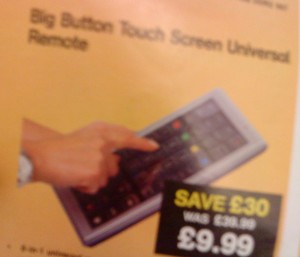 Oh how i laughed when i spotted this in Maplin’s Sale leaflet. It’s just incredible. Why on Earth would you want a remote control THAT big?! Look at it! It’s mammoth. According to the specs it’s nearly as long as a piece of A4 paper and over half the width. If you need a remote control that size, how big is your telly? And how close to it do you have to sit?