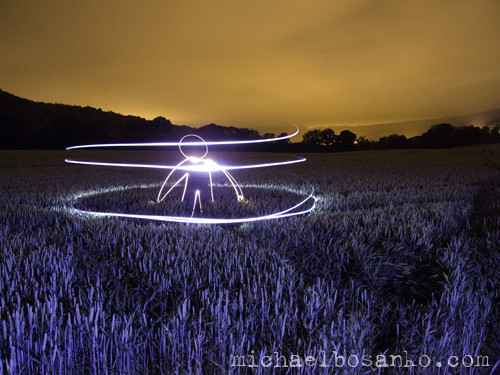 Apparently no photoshopping involved here – it’s all done with glow sticks and long exposures. I’m curious to know how the artist isn’t captured in the image moving between each object though…?

A Keyboard for the XBOX360.

Inputting text on the XBOX360 with the game controller is very tiresome for more than a couple of (very short) words, so when i discovered that any old USB PC keyboard would work with the text-entry portions of the XBOX dashboard i had to get one. Problem was, i didn’t want a big cumbersome PC keyboard lying about in front of the telly.

The solution, i thought, would be one of those dinky little, numpad-free keyboards that seem terribly undersized for everyday use on a PC… but fortunately whilst searching for one of those i came across something even better – flexible silicone keyboards. These can be rolled up and tucked away somewhere when not in use. Perfect. 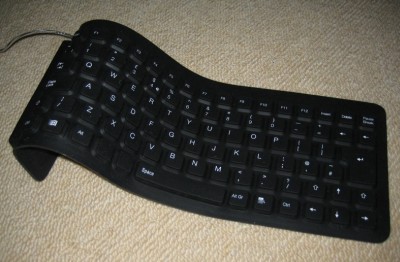 Mine arrived yesterday and works well, allowing for much quicker text entry… and, unexpectedly, it also allows navigation around the XBOX dashboard interface (cursor keys to move around, Return to select, Esc for back and Windows key opens the “Quick Launch” pop-up).

In terms of hardware quality the device is about what i expected for £7.50 – an unknown brand, a cheapo tinfoil USB lead and several unmarked keys. That said, it’s not too bad looking and actually feels pretty durable. Admittedly, any sort of USB keyboard lacks the convenience of the official Messenger Pad but it was a fraction of the price, which is more important given how infrequently i’ll use it.

Oh, and if you’re going to buy one of these yourself, watchout for the entrepreneurial souls on eBay selling these as “XBOX Live Messenger Keyboards” – it’s the same shit but twice the price.

Until the iMac and Mac Mini are updated, I would tend to agree.

Doesn’t have quite the same ring to it as Apple Store, does it? Following Apple didn’t work for Dell… But Microsoft are reportedly planning on opening their own retail outlets anyway.

I am curious to know what they’re planning on selling though. Will it just be a real-world incarnation of their online store, selling boxed copies of Windows and Office, XBOXs, XBOX games and a selection of keyboards, mice and webcams? Or will they be flogging PCs too? But if so, whose PCs? Dell? Sony? HP? Toshiba? All PC manufacturers? Political minefield, methinks.

Definitely an interesting prospect though, MS having a physical presence where customers can talk face-to-face with them. Personally, I can’t wait for the first Youtube vid of some irate Windows user giving an unsuspecting Microsoft “genius” a right ear-bending…

Just ended up on Comedian (or would he prefer the title of Statistician?) Dave Gorman’s blog and was given a reminder of just how good he can be thanks to this post. Superb.

On a more serious note, Mr Gorman is also pointing people towards Dr Ben Goldacre’s Bad Science blog post(s) on the hoo-hah caused by trying to shoot down some of the hysterical bullshit surrounding the MMR vaccination in the UK.