There’s a cartoon in the free Metro newspaper called This Life. It’s drawn by Rick Brookes and is a fine example of topical British satire. Here’s yesterday’s, for example:

Sadly there’s no online archive of this work, so i had take a screengrab from the e-Metro. Thus giving this post a very tenuous tech-angle.

Before I get distracted by new Mac Minis, iMacs and Mac Pros (which look like being announced today), i just wanted to mention the ASUS Eee Keyboard PC, which Engadget has had chance to play with at CeBIT. 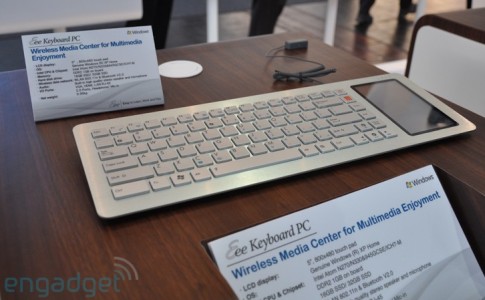 Yes, that is it. That keyboard is the whole PC. And a reasonably slim keyboard it is at that. I’m really quite impressed especially since they’ve managed to cram in an Intel Atom processor, 1GB RAM, a 16GB solid-state drive, ethernet, .11n wireless, bluetooth, speakers, microphone, 2 USB ports, and both VGA and HDMI video outputs! Plus it has a 5-inch touchscreen. Basically, it’s got everything you’d expect from a PC but in a fraction of the space. I’ve always had a soft-spot for the tiny cases that can be created with mini-ITX and nano-ITX kit… but this is a particularly good example. And the Apple-esque slim, rounded keys are a nice addition too. I love it.

Funny how things come back into fashion, eh?

…the world, according to Microsoft’s Office Labs at least, will look like this:

It certainly looks like a spiffy place to live. I do wonder if MS could actually create things so beautiful and seamless in reality though? And how much it’ll cost to be a part of? Time will tell i suppose.

For anyone that’s still reading, there’s a bit more information and a slightly better quality version of the video available on this Office Labs page.

As a parent, I’m glad that at least one news outlet is debating these important matters…

Each time i attach a huge file to a message in Gmail i curse Google for not having some sort of indicator of how your upload is progressing… But not today. No, today i smiled. I smiled a great big thank-you-google-geeks smile because gmail now has an upload progress bar for your attachments. Huzzah!

Having since checked the gmail blog, it seems they’ve also added support for multiple selections for attachments. Another minor grievance bites the dust.