Imagine the jumpy, ledge-grabby bits of Tomb Raider or the jumpy, ledge-grabby bits of Assassin’s Creed played in first-person and you pretty much have Mirror’s Edge. It’s essentially a game of “free-running“. I won’t bother describing the story as it’s pretty atrocious – much like the 2D-cartoon cut-scenes in which it is played out – suffice to say that in the near-future portrayed, postmen jump about rooftops. 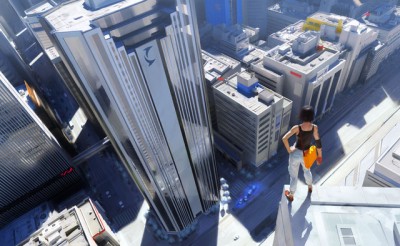 You run from A to B with objects (boxes, drainpipes, etc) along the way coloured red to indicate some usefulness to your progression. This hand-holding is good, except that you’re completely lost without it. And even when you can visualise what you need to do to get somewhere, it’s often incredibly difficult to actually do it. Thus the game is one of the most frustrating and infuriating i’ve ever played, with some vaults literally taking 50 attempts or more. That being the case i was surprised to finish the story-mode so quickly (under eight hours – I reckon a decent gamer could do it in well under five).

Would i recommend this game? Well, as it’s a bit novel, yes. Just don’t buy it. Borrow or rent it. Or if your parkour’s any good, steal it.

The Register has a peek at an upcoming Small, Cheap Computer™ from Sharp called the Mebius. It’s pretty much the usual netbook fayre… except for the inclusion of a reasonably large, multi-touch trackpad which is also an LCD screen. The video of it that the Reg show just depicts it being used for doodling but there’s a ton of potential for such a component. I hope this is something we see other manufacturers pick up on.

Just a shame that the Mebius looks like it won’t be all that cheap, like a lot of the more recent netbooks…

I’ve just come across AlternativeTo. As the name might suggest, it’s a site for finding alternative software to those programs you already know and love. Or can’t afford. It lists Windows, Mac and Linux stuff as well as some online apps. Definitely one to bookmark.

It seems that the BBC being forced into making iPlayer flash-based (so that licence-fee payers running OSX or Linux could use the service) has made the other stations sit up and take note. Yes, i realised last week that all 5 of the UK’s “terrestrial” channels now have a free online offering and, best of all, they all work whether you’re on a PC or Mac. Like the BBC, Five uses a flash player now and Channel4 has dumped it’s Windows Media-based system for a flash offering too. Sadly ITV has only gone as far as switching to Microsoft’s Silverlight (MS’s attempt at a Flash killer) but at least it’s not Windows-only.

Here’s the links if you don’t already have them:

Here’s a great article summarising the last 28 years of OS interface design, complete with screengrabs of the Xerox Star GUI (1981) through to today’s Vista, OSX, Gnome and KDE interfaces.