That is unless you prefer to use leading zeroes in the date. Or you always write out the date in full. Or indeed if you’re a silly American. In any of these cases nothing particularly interesting is happening with regard timestamps today, so forget i said anything.

Twitter has been unavailable for most of this afternoon. The Register and BBC are reporting it’s because of a DoS attack. At times like these i wonder how much more strain the site in question is put under simply by the genuine users repeatedly refreshing the page to see if it’s back online. I know i’m guilty of doing that today.

The big (general-public-friendly) tech news today is that ITV have managed to sell Friends Reunited. The original “social networking” website was bought by BrightSolid Ltd for 25 million quid. You may recall that back in February when the FT revealed that ITV were looking for a buyer i had this to say…

Well, i got the massive loss bit right (somewhere in the region of £100million-150million) and i reckon that i didn’t do so badly on the “relatively unknown outfit” call either. I’ve never heard of BrightSolid (have you?) but apparently they’re a subsidiary of publishers DC Thomson (Beano comics, etc) and mainly deal with online genealogy stuff. Presumably that means they’ve bought FR for the “GenesReunited” customers more than anything else. As for my prediction that FR will disappear completely within 6 months of any sale, well, the clock is now ticking… Call back next February to see just how wrong I am.

Now please excuse me while i go and delete my Friends Reunited account.

Please everybody. Please nobody.

I recently had cause to unbox and setup a Toshiba Tecra M10-17H laptop. I expect, like me before this experience, you’re unfamiliar with this machine and are wondering why the hell this is going to be of any interest. And rightly so – it isn’t a computer the world, as far as i know, is rushing out to buy. But it is certainly a curious bit of kit. Let me explain.

The “computer” spec of the thing is all as you’d expect (Core2Such-and-such, X GB of RAM, X^10 GB hard disk capacity, etc) and  it has all the I/O interfaces in all the quantities you might expect on a modern laptop – three USB2 ports, a VGA video output, a DVD writer, an ethernet port and So-Many-in-1 cardreader. However, the number of other things included just smacked of desperation – desperation to please everybody.

The most immediately obvious example of this is the “dual pointing device”. That is to say, the laptop includes the traditional touchpad you’d expect to find but also the IBM-style nipple-in-keyboard system… 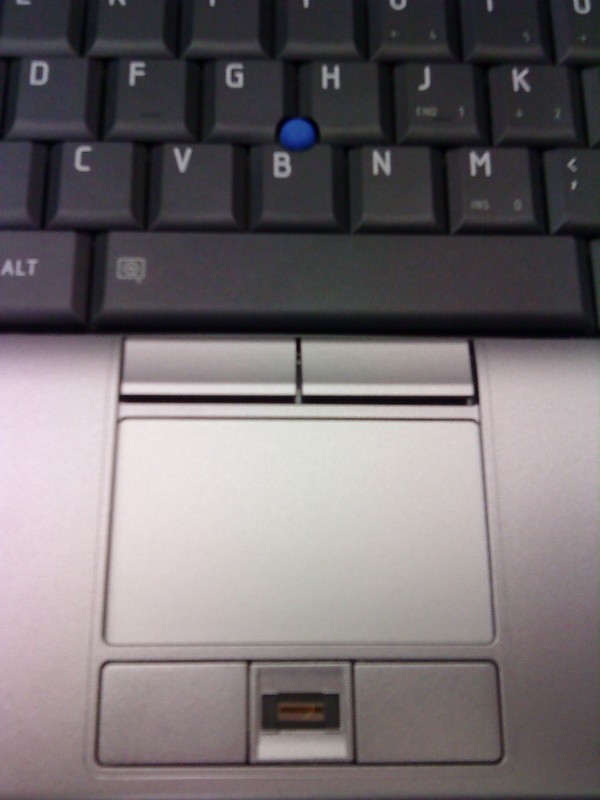 This just strikes me as nutty. Trackpads have long been the “standard” Mouse for laptops, so why bother including the old IBM ThinkPad nipple setup too? Either there’s a market for devices with the Nipple or there isn’t – so make a Tecra with a Nipple, or don’t bother. Don’t complicate things and compromise by including “dual pointing devices”.

There’s more evidence that this machine was put together with a “lets try and please everbody” attitude though. In addition to all the I/O listed before, this laptop also sports an iLink port (AKA firewire), an eSata port, a slot for a PC Card, a “Smartcard” slot, a 56K modem and Serial port(!). Can anyone think of any base this thing hasn’t got covered?

So, what’s the price to pay for all this “functionality” and “compatibility”? Well, apart from the £950 hit on your bank account balance, it has looks only a mother could love. And a weight only a mother could bear to carry around. It is truly a brick. Albeit one with everything you could ever need.

Actually, thinking about it, i’ve just realised who might have “designed” the Tecra M10-17H… Well, he does have form…

I’ve neglected Zero Punctuation lately but have just indulged in a mass catch-up. Last week’s “E3 Hype Massacre” is well worth a watch, if only for Yahtzee’s take on Microsoft’s fancy Project Natal (and indeed, all motion controller systems).