iPhone 4 ownership one year on.

Last June i took ownership of my first iPhone, the then freshly-released 32GB iPhone 4. You may recall i shared my thoughts of the device after having had it for 1 week and after spending 1 month with it, so here’s how i feel now after 1 year with an iPhone…

Lets get this out of the way: I love the iPhone. And it’s not just about having access to a phone, calendar, alarm clock, email client, web browser, games console, iPod, sat nav, weather forecasts, notepad, dictionary, camera, video camera, torch, translator or any other specific function. It’s about the convenience and the immediacy of having those things (and more) on a device in your pocket – and it all working simply, reliably and well.

Almost all mobile phones – and not necessarily even “smartphones” – would be able to tick off a good proportion of the functions i happened to list above. Unfortunately, in my experience, it is as-if many of those functions were hastily added just to be able to check them off a list, and it shows. This is not normally the case with the iPhone.

Unfortunately, the iPhone and iOS are not perfect. Fortunately, however, most of the imperfections are very minor. 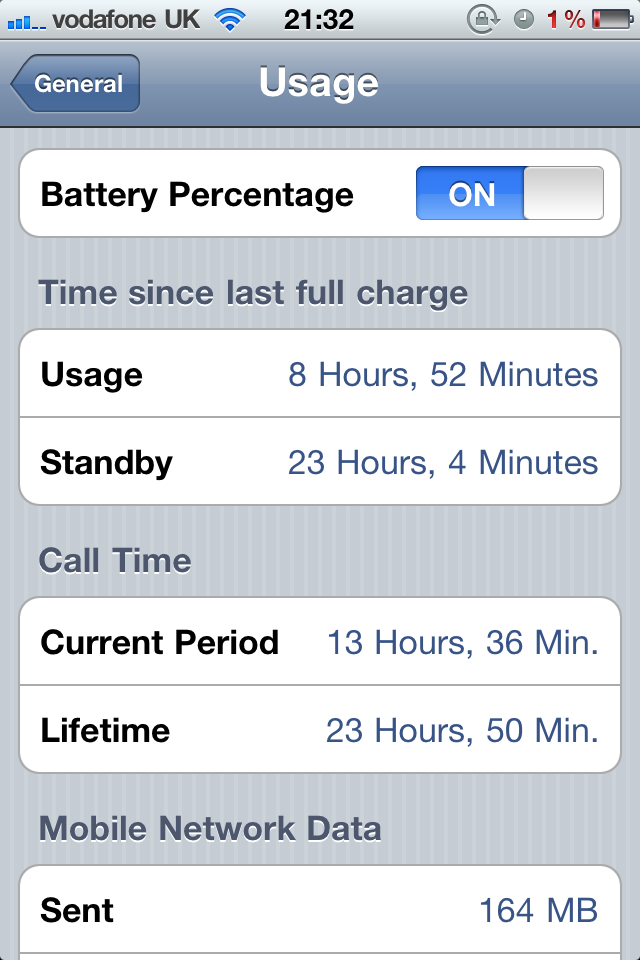 Battery life: This has been one of my gripes with the iPhone 4 since day one. It is almost certainly the case that i’m a “heavy” user. I do a lot with the phone throughout a typical day. Even so, I’d still like more than 6 hours usage time. I think the worst usage time i’ve seen from a full battery is about 5 hours. And the best is about 10. But then that’s usually with some iPod usage making it a bit of a misleading reading. The best battery life i’ve witnessed then is this time of 8 hours and 52 minutes – almost certainly obtained at a weekend when mostly using wifi.

Crashing: In the year i’ve been using the iPhone the system has crashed/frozen/stopped-responding-as-expected on two separate occasions. The first time, i was presented with a temperature warning screen. 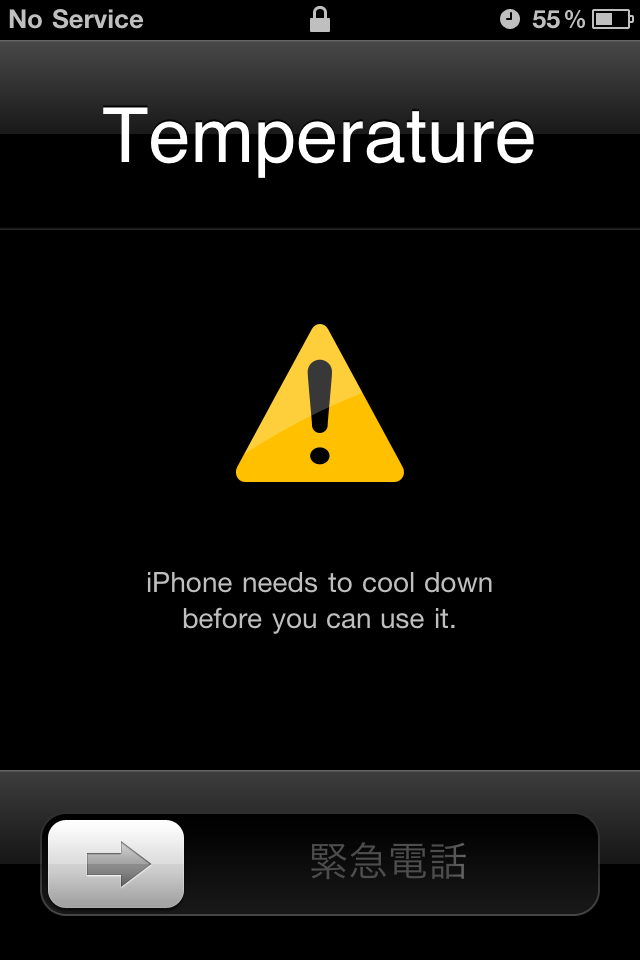 This was rather odd as i recall it was quite a cold day and the phone didn’t even feel warm in the slightest. Sliding the lock gave access to emergency calling but nothing else. The usual button combos to reboot didn’t appear to be working either, though as you can see it was quite happy to take a screenshot and save it to the camera roll. In the end, it was holding the standby button for a very long time that seemed to clear the error screen and everything behaved like there hadn’t been any problem. I did reboot it just to be sure though.

The second “crash” occurred many months later and at first i didn’t realise it’d crashed – I thought it’d run out of power as nothing was happening at all. It was only when i plugged it in and there was still no response that i started to worry. I had to perform a hard reset1 to get the phone working again.

Still, two system crashes in a year isn’t that bad. I’ve had phones in the past that required the battery yanking out on an all too regular basis.

Home button issues: The relatively poor battery life is my longest standing gripe with the iPhone 4 but my new main problem is with the Home button acting up. In the last few months, the button has been very temperamental. Mostly it has worked perfectly but there will be periods where the button just doesn’t register presses. You press and nothing happens. You press and press and press and press and nothing happens. You press again and it works fine. Then it’ll stop again. And start. And stop. And it’ll go on for hours like this – and then suddenly begin working flawlessy. And work for such a time that you forget all about the problem. Then suddenly the problem rears its ugly head again for another few hours. I can only assume the reason for this flaw is that very fine dust has worked its way through the hairline join between Home button and casing and is somehow bothering the mechanism. Of course, I don’t know this for sure and i’m certainly not opening the thing up to investigate. I have been to the Apple Store about the issue but, naturally, the button decided to work perfectly all the time i was there. I have known other people report this issue2 and have the unit replaced by Apple – indeed the Genius i saw said they would probably replace mine if i came in again – so hopefully i still have that option should i continue to have problems.

So, how do i feel after a year? Despite a few frustrating faults, I still adore the iPhone 4. I’d be really quite lost without it.