Apple today yesterday, as expected, announced a revised Mac Mini – and it seems last month’s leaked photo and video were 100% legit. It does exist, it does have two video outputs and it does have five USB ports. In fact the only detail from the leak that you could claim was incorrect was that it’d come with 2GB RAM. That is true of the “high end” model but it turns out the lower-end model only sports 1GB. That’s not so much incorrect as incomplete really though. 1GB is a bit of a surprise to me – i truly assumed 2GB was going to be the new base RAM level for the Apple range. The five USB ports and two video ports are very pleasant surprises – maybe Apple is becoming a little more flexible with age? Or maybe they’re just being flexible to tempt some more Switchers across to the Mac?

Today’s Yesterday’s announcement also saw updates to the iMac, Mac Pro, AirPort Extreme unit and Time Capsule device. The Macintosh updates were reasonably substantial internally (new chips, new graphics, more RAM, etc – now even the lowest-spec 24″ iMac looks like a bit of a beast) but since nothing happened in terms of designs it wasn’t all that exciting. Likewise the only hardware change to the AirPort Extreme and Time Capsule was the fitting of dual-band wifi card – so now you can simultaneously have 11b/g and 11n networks broadcast from the one unit. That said, Apple did also add a new software feature to these devices so that you can now create a “guest” wifi signal which is totally independent of your own network.

About the most interesting thing that’s happened today yesterday wasn’t even really announced. The most keen-eyed Apple-fanatics spotted very soon after the Store came back online that the wired Apple keyboard had lost its NumPad. Yep, the default wired keyboard is the same size as the wireless one. Worry not though, Apple haven’t completely lost their marbles (yet) – you can still get the full wired keyboard as a free configure-to-order option. I hope the choice is permanent but you never know it could just be while stocks of the “old” keyboard last or maybe it’s a test to see how many people actually want/need a full keyboard? Whatever the reason, the keyboard section is now about the biggest in the “Customise your Mac” page… 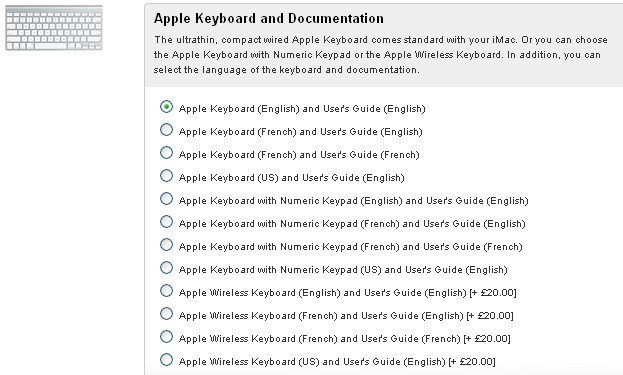 PS. Yes, i know you’ve already read all the above in a hundred other places by now but that’s what all the “today yesterday” business in this post is about. I did actually have this piece ready very soon after the announcements were made… but got interrupted and never found time to publish it. It had to wait until now. Sorry.